skip to main | skip to sidebar

Wherein I occasionally rant on various topics including, but not limited to, PHP, Music, and whatever other Topics I find interesting at the moment, including my brain tumor surgery of August 2010.

Yesterday, I went to my interview for the Paratransit (door to door ADA service).

I set it up while I could still "walk" down my seven front stairs in 1/2 an hour.

Three big burly guys in two shifts to haul my wheelchair down and up stairs:

My sister drove me to-and-fro.
Actually, Mike DeWhite with help from my sis (torn rotator cuff) and my SO (6 pins holding a steel plate in her broken collar bone) deserve special mention: Mike DeWhite man-handled me upstairs, with guidance from sis and SO.

Eight-hour ordeal. 17-minute Interview. Including snapping a photo for my ID badge.

Well we knew it had to happen in the end.

The brain cancer has won.

You know how they say in the old movies, "Get your affairs in order, you have 3 to 6 months to live?"

Well they phrase the first part differently, the last part is the same.

I have been given 3 to 6 months to live by the doctors.

Well I don't think the doctors know everything, and I'm trying this funny-looking headgear that makes me look like an Irish Rabbi. Things look bad. 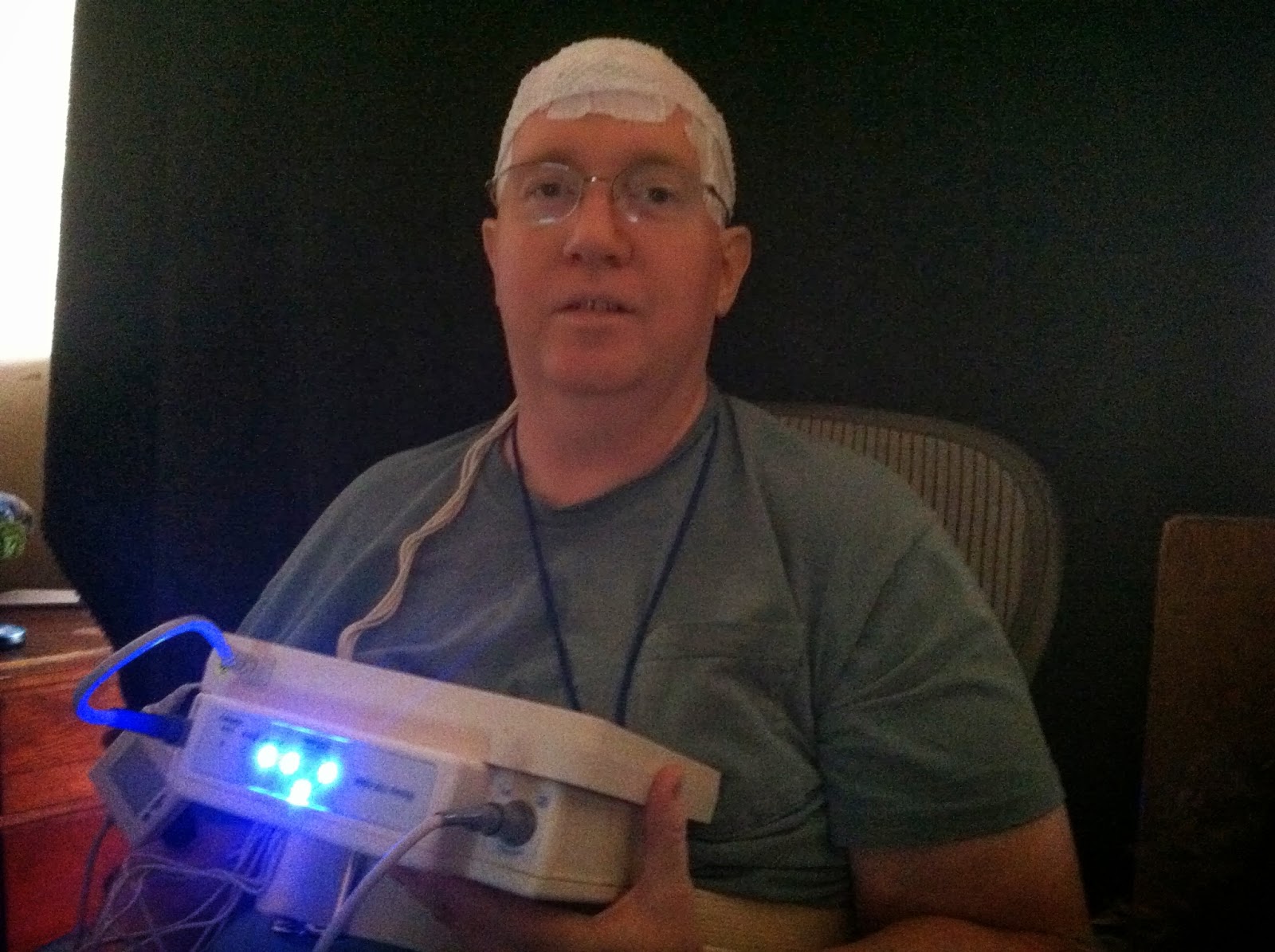 I have granted powers of attorney, made out my will, blah blah blah.

I'm just gonna let them foreclose the house I love.

I quit my job because I can't type, and a programmer who can't type is not a programmer.
[I'm dictating this to my daughter, who's taken such good care of me.]

The love of my life hasn't slept for days taking care of me, and my family has had to bear the brunt of my care. I thank them for standing by me during this period.

I hate to beg for money, but I am in dire financial strates. There's a PayPal link in the top corner. Any financial help would be a blessing.

For reasons beyond my ken, Facebook has a fluid-height IFRAME that seems to "not work" for a lot of people.

Probably people like me who know just enough CSS to be dangerous.

You can Google for various wordings of the problem, and find half a dozen equally good solutions.

Except the ones that use FB.Canvas.setAutoSize, because that's been replaced by the seemingly the same behavior FB.Canvas.setAutoGrow.  So you have to change your code for a (meaningless?) backwards incompatible change. Thanks Facebook. Again. But I digress.
(I welcome comments that explain why this function was renamed.)

You can Google for the FB.Canvas.setAutoGrow solution, but here's a TIP:

If you attempted to get your application to "fill" the page by adding height: 100%; to your CSS, it sort of worked sometimes, but not others, and so you turn to the real solution above...

When you do that, it does NOT work. The 100% "fights with" the FB code to produce, shall we say, less than desirable results, like making your page roughly a mile high.

So I have this Visioneer 7300 USB scanner that was acquired from a firing from a former job, since the owner didn't even want it back.

It's kind of a nice scanner, lightweight, with five programmable buttons on the front, such as scan and print with one click.

The UI for the button programming is about as bad as I've seen. I refuse to provide instructions because I basically click around semi-randomly when I try to program a button until it works. Kind of like Windows.

Anyway, I wanted to hook it up to my MacBook Pro, but it never seemed to work.

Then an upgrade to Windows made it not work there either because there was no driver allegedly, but I found that gimp could use something to make it work.

Actually, I think the driver for the PaperPort software was at fault, but I like gimp interface better anyway. Though gimp does take a long time to start up. Oh well.

So then I tried gimp on the Mac. With a bit of effort, I made it work.

Anyway, that's how I did it, and it might work for you, or not. And it even might be helpful for a different scanner. Or not.

Or even a different platform that can use sane. Or not.

I may have left out a minor step here or there. I'm horrible at taking notes because I usually figure I won't get it to work anyway.

synopsis: The US Sucks

Are the opponents of fair competition seriously suggesting that a survey of major cities around the world is biased to a great effect by population density?

Yes, USA has a serious "urban sprawl" effect. One has to only look at L.A., New York Metro and Chicago to see that.

But, really, is it any easier in Hong Kong, Tokyo, Seoul, Paris, Berlin, London or Amsterdam to tear up streets and install fiber?

Actually, if you think about it, the "urban sprawl" makes it easier

Sure, buying the fiber and running it a longer distance is more expensive.

But they've got more "elbow" room in those cities.

How in the world did they find any room in Tokyo to run fiber? The whole city is a spire with tiny apartments/condos crammed on top of each other like a Jenga game.

Have you ever seen the traffic in Paris or London?

The US doesn't even have a single city in the top 50. You have to scan down to top 90 to hit Los Angeles.

Does that prove their point? Or does that population density make it much more expensive to run fiber?

In fact, if you Google for prices of laying fiber, you will find the same answer everywhere: Population density is the #1 cost factor. They're running fiber inside sewers just to avoid dealing with tearing up streets!

Thanks to those who have already donated!!!